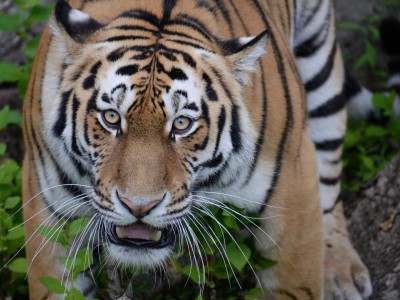 Welcome to the tiger homeland!

- if the client flies alone he is sure to be accompanied by departure and landing. We do NOT guarantee high-level English during Terney and Kavalerovo tours. As home-stay hosts in Terney and hotel personell in Kavalerovo do not speak English at all, we do recommend to think twice before taking the tour without an English-speaking guide.

Sikhote Alin state natural biosphere reserve is the largest in Primorye (310 thousand ha including sea territory) and located in the Northern underpopulated part of the region.

The reserve was founded in 1935 to preserve and recover the population of sable, which was on the edge of instinstion at that time. Today the main reserve object is Amur tiger. Nowadays there is less and less wild nature left on the planet, so it vital that each geographical zone has a nature reserve, a sample of primeval landscape, to which the results of anthropogenic activities could be compared and estimated. This is the task of biosphere reserves. UNESCO granted Sikhote Alin nature reserve with a biosphere status in 1979.

The reserve is inhabited by 63 spicies of land mammals: Amur tiger, Himalayan chamois, Japanese deer, brown and Himalayan bear, musk deer and hog, Far Eastern red deer and elk. There are 342 birds spieces, 8 reptiles, 5 amphibia, 32 fresh-water fish species, 1100 plants species, including 38 on the edge of instinction (yew, devil’s club, rhododendron Fori, yellow lady’s slipper and others). By visiting the reserve one can learn everything or almost everything about life and habits of wild animals straight from the source – from scientists, working deep in taiga.

A car ride from Terney town – 27 km to the reserve border lodge. The walking route lies in the picturesque valley of Yasnaya river, surrounded by cedar and large-leaved forests. You will often walk by various traces left by hoofed animals – hogs, Far Eastern red deer, musk deer. On the route you will also see a rare plant from the Red Book - Calypso bulbosa,Orchid family. This area is a habitat of Amur tiger – you may see there pads and photo-traps.

Lake Blagodatnoye, called “the lake of God’s heavenly grace” by settlers, ages ago used to be a lagoon and was formed during one of marine regression. At present only a narrow pebble beach separates the lake from the Japanese see. When the storm comes, the beach is washed away and the lake is connected with the see. This is when an interesting exchange takes place: thousands of hatchlings and full-grown fish (capelin, redeye, flat fish, taimen and East Siberian char) stream from the lake to the see and back.

Thick bushes and grass on the shores of the lake, woods on hillsides are home to many birds species, including migrating. During the peak of the fall migration one can count up to 9 thousand ducks, representing 24 different species. You may also find a whooping swan and several geese species.

In humid fields around the lake there grow rare orchids - Pogonia japonica, Spiranthes sinensis, Hammarbya paludosa, Habenaria and others. The fields on the shore are also a fine pasture land for wild hoofed animals (Far Eastern red deer, musk deer and Japanese deer). In the twilight or at dawn you may see haul-out sites, and sometimes even see a musk deer, a hog or a tiger at bright daylight.

The tour’s goal is to get acquainted with the life of spotted Largha seal (Phoca largha Pallas). Their rookery is located in the rocks of Severniy Cup. The seals inhabit this place all the year round, both in the summer and during migrations in the fall and winter you may count up to 400 seals in the rocks. The route begins at the upland fringe of Sukhoy Kliuch spring, where salmon comes for spawning. It goes further through the wood and the field. You may see Manchurian walnut, alder, ash, maple. During spring and summer lots of flowers bloom here. On route you will often see traces of hogs, Japanese deer, Far Eastern red deer, hairs, musk deer, bears and tigers. The path leads to a view point, from where you will be able to watch birds and seals. The rookery at Severniy Cup is one of the few places on the shore of the Japanese sea, where so many seals gather. This route is a walking route, through the wood, the field and then back by the sea shore. Full distance – 5 km.

Terney is a town in the North-East of Primorye territory, 650 km away from Vladivostok. It is located on the right shore of Serebryanka river, 3 km away from where it meets the Japanese sea.

The bay of Terney was discovered on the 23d of June 1787 by Jean François de Galaup, comte de Lapérouse. He named it after a French admiral Charles de Ternay. The population of the town is 4000 people. Main business is  timber stockpiling and utilization. Since 1992 there is a collaborative Russian-American program, realized in Sikhote Alin nature reserve – WSC – Siberian tiger, which goal is to  study and preserve the tiger.

Kavalerovo is an administrative center of Kavalerovsky district. It is located in Zerkalnaya river valley, population – 17 000 people. He town was founded in 1910 by Fedor Popolitov, Saint George’s Cross decoration holder (a “decoration holder” corresponds to the Russian “kavaler”, this word gave a name to the town). The district economy in XX centure was defined by a mining and concentration complex, that mined stannum. Todays economy is sponsored by the government, it is mainly timber stockpiling.

The town is famous for:

- Dersu rock, a place where according to the legend the famous geographer and traveler Vladimir Arsenyev met his guide Dersu Uzala.

- Ruins of the mining complex

Safari Park is 1.5 hours away from Vladivostok and only 45 minutes away from the airport. On the limited part of wood wild animals walk freely. Everything is natural – no cages! You may take photos with the animals, feed and stroke them. More than ten hoofed animals, injured by jacklighters, found their shelter here. These are the tasks of the park, to help troubled animals, to show them to the visitors in their natural surroundings and to promote ecological education.

Tiger park is as large as a football field, a 130x50 meter forest sector. Two tigers (Amurochka and Taiga) walk freely here. You can be sure to see them.

Predators park – 8 species of predators. It is a fenced part of wood, where predators feel free to run around, communicate and play. Visitors stay close watching animals without any cages and may take photos, but not touch or feed the animals. The most interesting animals in this park are red wolves. They are very rare and used to inhabit Primorye territory, but right now they vanished from our fauna. Their neighbours in the park are Himalaya bear cubs, forest cats, red and common wolves, a fox, raccoon dog, common raccoons and a badger.

Birds park – 12 species of flesh birds. You may take a photo with a hunting bird on your hand.