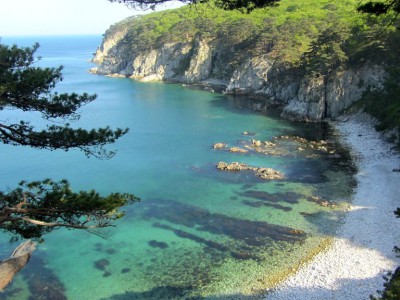 The Far Eastern Marine Reserve is the only one in Russia. It is located in the south of the Far East and over 98% of its area consists of the water area of the Peter the Great Bay of the Sea of Japan.

We are invite you to explore The Far Eastern Marine Reserve wih DALINTOURIST company!

7:00 - departure from Vladivostok on a cross-country bus. Travelling to Khasansky district, to the very south of Primorye, to Gamow Peninsula.

12:30 - crossing the Gamow Peninsula, stopping at observation platforms to enjoy the view of the islands, beaches and cusps of the Marine Reserve. Arrival to the crossing gate at the border of Marine Reserve territory.

13:00 - 15:00 – guided tour "Orlinka Bay - a garden of rocks and islets". Basket luncheon from your own products. Relaxation on the shore of the cleanest reserved sea.

Details on the route:

- We move along the route on a cross-country, 4WD, elevated 20-seater bus. Roads to Gamow Peninsula are very bad, which is why we take that bus. If some parts of the route turn to be impassable - we continue on foot!

- Dress in sports clothes; something comfortable and corresponding with the weather. Have sneakers for footwear! All your things should be in a backpack, no bags or pouches!

- We have the following trials ahead of us:

Beautiful “grave” pines grow on two low islands where we shan’t stray off the paths. Be extra careful on the slopes – there might be a sheer drop!

The beach is rocky, filled with large pebbles.

- You need to have a basket luncheon + thermos + drinking water + garbage bag with you.

The Far Eastern Marine Reserve is the only one in Russia. It is located in the south of the Far East and over 98% of its area consists of the water area of the Peter the Great Bay of the Sea of Japan. Small reserved islands house the largest Black-tailed gull and Temminck’s cormorant colonies in the world and the only nesting places in Russia of the rarest birds in the world fauna - yellow-tailed herons and black-faced spoonbills. The main objects of protection of the Far Eastern Marine Reserve include the Far Eastern trepang, the Alaska king crab, the Pacific octopus, the larga seal, the Japanese scallop, seabird colonies. Whales, minke whales, killer whales, dolphins can be often seen in the waters of the reserve. In 2003 the reserve received the international status of a biosphere reserve.

Orlinka Bay is located in the eastern section of the Marine Reserve. You will get to know about the geological processes of formation of the coastline, where you will see the creations of the greatest architect of Earth - his Majesty the Pacific Ocean. An amazing ensemble of sand and stone. You will learn how the mineralization and salinity of sea water affects the biological diversity of the underwater world. The littoral areas of Cape Orliniy will allow you to observe the marine life. Here, among the rocks matted with seaweed, you’ll see the limpets frozen still, starfishes and sea hedgehogs slowly moving along the sand bed, and soldier crabs bustling about. The cliffs and sand and pebble beaches will allow you to see the plant species which are not only able to survive on poor stony soils, but to enrich them, emphasizing the fragility of the universe.