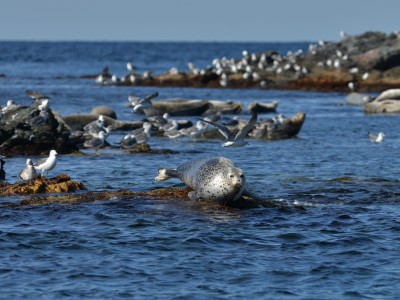 Excursions are available from May to October.

Swimming season is from July 20 to September 7.

Successful fishing trip is available from May to June.

8:50 – Group gathering at the Korabelnaya embankment.

11:00 – 12:00 – Riding at anchor near the Unkovskiy stones. Larga seal rookery observation. If there are good weather conditions, you may swim with Larga seal in the sea or do fishing.

- WARNING! This is adventure-type tour! You must be ready on clothing and footwear and mentally for an extreme journey! There are no beach-rescues! In addition, there is oceanic current along the coast, therefore it is dangerous to swim far from the shore and also you cannot swim on swimming circles and mattresses! The tour is sea-bound and we spend a lot of time in the sea. In this reason, this tour is not for people who have seasickness! Also we do not take children under 12!

- Our launch is fast-sailing and cruising and optimized for group of 20 persons. There is foremost closed passenger room and opened stern with the benches at the launch. There is also a toilet room. For the reason that the weather on the sea is changeable, you must bring a jacket or a warm sweater with a hood, or raincoat! You also must be ready to climb and dismount on the ladder from the launch. It may be a problem for people with dexterity impairments. So, you also must be ready to launch’s motions on the sea!

- You also need the swimming shoes because of stony shore! You can take a litter or a rug.

- For swimming with the Larga seals: the launch comes to an anchor, then tourists wear the paddles, a mask, diving suit (if they have), swimming slippers with protected noses (there are sea urchins in the sea). You need to swim and dive well. Usually tourists sail to the sea shelf and stones, where the Larga seals like to relax. The sea is not deep here (waist-deep), but there are also stones and waves. Larga seals are friendly and curious. If you do not scream and do not make sudden and quick movements, the seals will allow you to approach close enough. Also you can wear a life jacket for safety. This entertainment is not for you if you swim badly. If there is a strong wind and big waves rise, it will not be safe. In this case, we will not swim with Larga seals, but we watch them from the launch! If you do not make a decision to swim with the seals, you can swim in the blue sea around the launch or dive from the side.

- The island is uninhabited. There is no sea wall and no clear place for landing. We land on unequipped coast by descent along a steep staircase. The landing site is selected individually each time and depends on the waves and wind.

- If the weather conditions are not good, you can take a walk to the lighthouse and see the defense line with 130-mm main guns.

Askold is the island in Peter the Great Bay of the Sea of Japan in 50 km south-east of Vladivostok city. It is separated from the mainland and from the neighboring Putyatin Island by the same strait, that about 7 km wide. The island area is 14.6 km². The island is mountainous, it has three peaks more than three hundred meters high, the highest of which reaches 358 meters. The island coasts are elevated and bold. The island has one single large bay named the Rider. The bay goes into the island deeply, because of which the island outlines on the map remind a horseshoe. The major part of island is covered with broad-leaved forest. Meadows and woodlands are located near the coast, near the Tumannyi, Palchatyi, and Stupenchatyi Capes. The island was known to the sailors of the Bohai state. Later, it was populated by Chinese gold diggers and Laminaria getters. Strait and then the island is got the name of among the first Russian screw frigate called “Askold”. There are abandoned military facilities, tunnels and old cemetery on the island. Also the light keeper of the lighthouse lives on the island all year round. There is the underground tunnels system that will be of interest to diggers. In addition, the island is interesting for divers thanks to clear water, great depths starting near the shore, an abundance of underwater flora and fauna. There are few beaches on the island; they are mostly boulder and pebble. The main island`s wealth is privacy, inaccessibility, almost pristine wilderness, clean beaches and cars absence!

The tour price on the group of:

There is an opportunity to go to the Askold Island with the Russian group on weekends. Price is 3600 rubles (without tourist guide).

Dining is not included! We can organize it for additional payment – 2000 rubles per person.