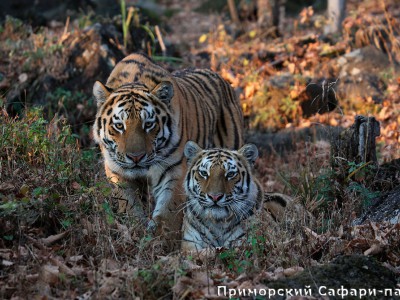 To see animals that live in the Ussuri taiga, it is not necessary to climb into the jungle of the Sikhote-Alin. In the safari park they live in a natural environment and often surprise people with their habits.

The Safari Park was created by Dmitry Mezentsev, a biologist and wildlife photographer, in 2007 and solves several problems: it helps wounded and sick animals, releases recovering animals back into the wild, and provides education on the environment. And, most importantly for visitors, it provides the opportunity to look a wild animal in the eye. This is not a zoo where the animals are sitting in cages, and it is not a circus. Here the animals live freely in their familiar environment, albeit limited to a few hectares.

The park is divided into sections: hoofed animals, predators, and birds ... You can explore with a guide. We will start with the hoofed animals. Then we'll go to the predators, which include all the living major Primorye types: the Amur and Taiga tigers. The guests view these beasts from a safe place, a surveillance platform lifted to a height of several meters, which runs virtually the perimeter of the tigers’ territory.

Dersu Uzala, the hero of Arseniev’s book, stated: Happy is he who has never seen a tiger. The old Goldi knew that the meeting with the owner of the taiga could end badly. But here the Safari Park makes it possible to see a tiger up close and remain unscathed.

The Safari Park is an illustrative textbook of corporate Primorye biodiversity. It is home to wolves (including the rare red wolf), Japanese raccoon dogs, bears, Far Eastern forest cats, small Sitka deer and Far Eastern red deer. There are also roe deer, musk deer, and wild boars ... You can pet and even feed many of the animals. The birds are a separate song: hawks, owls, eagle owls, pheasants and others. The Park’s population is constantly changing.

The park of hoofed animals of Primorsky Safari Park occupies about 5 hectares of forest. This is 3 parks (winter, summer and autumn). I one park there are shown a group of deer, and two parks always rest to grow plants, and it was beautiful, as in nature. Different types of ungulates are kept in the same territory without conflicts. The deer are transferred from the park to the park periodically. At different times of the year, visitors admire beautiful hand-held deer in different territories, with completely different landscapes.

Visitors come with a guide to the park, walk along a circular road and see animals as in nature - without grills in front of their eyes. Hand deer go out to the people themselves. They can be fed from the hand, pat and photographed nearby. Food for ungulates is free. It is forbidden to carry its food to the Park (it's forbidden to go to the forest from the road so as not to trample down the Park - the deer's legs are small, and the people are huge).

6 species of wild ungulates of Primorsky Krai, as well as hand rabbits, freely walk on this territory.

In the Park of hoofed animals are now living:

- 2 musk deer (Live in a separate beautiful Kabarog Park on the southern rocky slope.) We look at them from the bridge, without grills before our eyes.)

In the beginning of summer of 2017, deer are born in spotted deer, roe deer, hybrid female and musk deer.

The park of leopards.

The length of the park is 150 meters. The width is about 40 meters. On the perimeter of the park of leopards is a bridge, with a six-meter height, which can observe leopards as in nature - without grids in front of the eyes.

The relief in the leopard park is chic: a steep rocky southern slope with a natural shelter-log for breeding offspring, many trees, there are even plots. Near the observation bridge, picturesque rocks, in the distance can be seen the Sea of ​​Japan.

At the moment, one leopard resides in the park. Soon, a female Far Eastern leopard should arrive in Safari Park.

Located Park Himalayan bears next to the Park of Leopards. Visitors watch bears from the bridge, as well as leopards and tigers. The park is built on the southern picturesque slope of the hill. At the bottom of the Park is a plain with a summer pool for bears, and at the top is a steep slope with rocks and powerful beautiful rocks. Park bears - the most complex structure in Safari Park. On these slopes and rocks not every person can climb, but we built here. In the park of bears grow oaks and bushes hazel and lespedetsey. The park of bears is about 80 x 40 meters in size, so that the club-foot is where to go for a walk. In the park of bears live two Himalayan Chuk and Nastya, as well as the badger Nastya.

8 species of predators. It is a fenced part of wood, where predators feel free to run around, communicate and play. Visitors stay close watching animals without any cages and may take photos, but not touch or feed the animals. Their neighbours in the park are Himalaya bear cubs, forest cats, red and common wolves, red wolves, a fox, raccoon dog, common raccoons and a badger.

12 species of flesh birds. You may take a photo with a hunting bird on your hand.