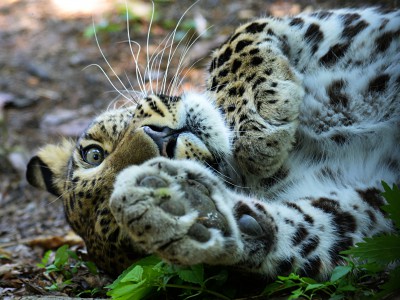 The main goal of the "Land of Leopard" is the preservation of Red Book cats and the unique nature of this corner of Primorye.

In 2012, the Land of Leopard National Park appeared in the south-west of Primorye. Despite its young age, this area is a necessary mission to preserve the rarest wild cat in the world, the Far Eastern leopard.

The home of a unique predator is very similar to it: ancient relict plants grow here, in the neighborhood typical “southerners” (Himalayan bear) and “northerners” (wild boars and roes) settle. In addition, this is the only place in our country where four wild cats live at once: the Far Eastern leopard, the Amur tiger, the lynx and the Far Eastern forest cat. For its convenience, the Narvinsky Tunnel has even been built on the “Razdolnoye – Hasan” highway. Now cars can dive under the ground while leopard can walk quietly along its paths without passing through the highway.

There is also scientific interest to the owner of these places: there is still a little bit known about the Far Eastern leopard and its lifestyle. In the National Park, the inhabitants are monitored using photo-traps, which have more than 300 installed throughout, are engaged in tracing - reading the intricate record of leopard tracks on the snow, collecting genetic material (wool, excrement) for laboratory research.

Although it is almost impossible for a tourist to meet a Far Eastern leopard in the wild nature (this cat masquerades well), there are many interesting things you can know about inhabitants in the Land of the Leopard and, if you're lucky, follow the fresh tracks of the spotted predator. It is not surprising that this territory is annually visited by Russian and foreign tourists.

Now there are 2 eco-trails for the excursions:

The path leads to a cave, similar to those where Far Eastern leopards breed their rising generation.

Even on the bus at the entrance to the national park, tourists are warned about the need to comply with security measures. Traces of wild cats are occasionally found on the road from which the hiking route of tourists begins.

Entering this path, it is important for every visitor of the national park to remember that here he is already visiting wild animals, and not vice versa. But one should not overly fear: tigers, and especially leopards, are very cautious animals, and it is always easier for them to watch their guests at a safe distance from a distance. That is why the meeting of a person with one of these cats is a rare phenomenon.

Further guests of the Land of the Leopard approach the realm of the main inhabitants of these places. The fact is that, unlike tigers, leopards love to move in the forest on elevations - ridges and ranges. That is why the next stage of the route is a small ascent to the mountain Rocky. Back in the Soviet years, climbers found 11 caves in it, some of which occasionally serve as a shelter for leopards. The most famous of them are Barbaris, Leopard and Barabashevskaya.

The route allows you to take a fresh look at the "house" of the Far Eastern leopard. This is a recreational walk through the forest, in which tourists are waiting for the ascent to the mountain Buslenko and meeting with the southern Ussuri taiga.

This ecological trail is a real encyclopedia. The route passes through a section of deciduous forest with cedar plantings of different ages. During the guide's story, as well as with the help of detailed visual information on stands and signs, guests of the Land of the Leopard will be able to: learn about the history and prerequisites for creating the oldest in the Far East Cedar Pad reserve and the Land of Leopard National Park; plunge into the unique animal and plant world of protected areas; get acquainted with modern methods of accounting for large mammals, including the Far Eastern leopard - the rarest large cat in the world, the national pride of Russia.