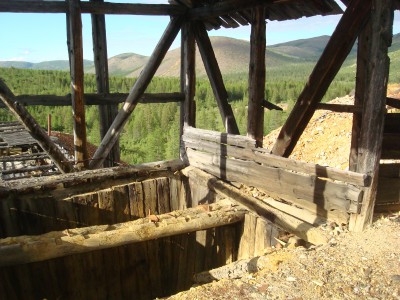 We offer our guests tours of the Kolyma highway with a visit to the historical places of Kolyma development. Tours include arrival to the memorial places of mass repressions on the Kolyma. In these places, where now you can only pass by high-speed transport, you can still see hills dug by mines and quarries, wooden coppers and industrial tools, security towers and trolleys, skewed wooden structures, remnants of the life of prisoners and guards. It is impossible to remain indifferent when you are in these places.

According to historians in the region there were more than four hundred camps, from the largest - transit, through which the main stream of prisoners passed, to small camp sites where one or two hundred prisoners could be held. Large camp departments, organized directly in production, could contain several thousand people, but no more than tens of thousands - their management would be extremely difficult. There were also smaller camp trips, obviously created temporarily, for the period of performance of a certain work - the construction of a section of the road, the activities of logging, metal mining. In the late 50's, most of the camps were closed. Together with them, some settlements were closed, but most of them remained. Over the past 55 years, they have devoured the nearby abandoned camp infrastructure. The equipment was transported to existing enterprises or scrapped, the buildings were rebuilt, dismantled, placed on firewood, demolished or burnt. Camps focused on the extraction of placer gold, often located on the field itself, and were destroyed when re-mining gold from badly worked old dumps. There have been cases when, with such extraction, old burial grounds were also uncovered. In the most preserved form remained camps and production, remote from the Kolyma track and closed with their free satellite villages in the mid-50's. Most often these are mines, where they extracted cassiterite - tin ore. The very name of our city is often associated with Stalin's repression, when millions of people died as a result of terror and false accusations.

Breakfast at the hotel. Departure from Magadan, on the way - lunch in a roadside cafe.

Visiting Dneprovsky former mine, dinner at the stake on the territory of Dniprovsky.

Overnight at the sanatorium.

Breakfast in the sanatorium.

On the way - a visit to the museum GULAG (Memory of the Kolyma) in the village Yagodnoe.

Accommodation in the hotel in Susuman.

Accommodation in the hotel in Susuman.

Transfer from Susuman settlement to the Talay settlement.

Lunch at a roadside cafe in the village of Laryukovaya.

Accommodation in a sanatorium in Talay settlement (single accommodation), dinner.

Breakfast in the sanatorium.

Lunch at the sanatorium.

Dinner at the hotel restaurant.

Sightseeing tour of the Magadan city with a visit to the Mask of Grief monument.

Business lunch in the restaurant.

Excursion to the coast of the Sea of Okhotsk (Nyuklya) to the site of the first geological expedition landing.

Transfer to the airport of Magadan (50 km.).

Attention! The former Dniprovsky mine is located 20 kilometers from the federal highway. The road to the mine is in unsatisfactory condition, so we plan a trip on the KAMAZ shuttle bus. Since the snow cover in our region comes only at the end of May, we reserve the right, in the absence of the possibility of organizing a transfer in connection with floods, to cancel the trip to the Dneprovsky mine.