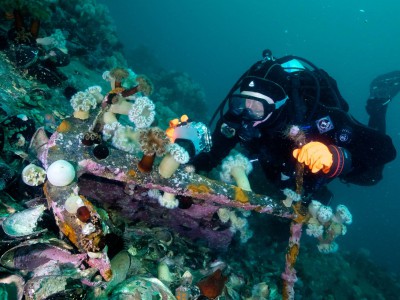 If you are interested in scuba diving in Primorye then you have come to the right place. Like you, we love scuba diving. We have professional divers in our staff who know first-hand the best dive destinations in Primorye.

Scuba diving in Primorye is an exceptional and unforgettable experience well known to the locals and just discovered by the international diver.

- Give trustworthy advice and answer your questions

- Make your life easier and colorful!

- get a breathtaking adventure and adrenaline

- get a soul relaxing vacation and reborn

- get the sensation of breathing underwater and get to know a completely different and beautiful world!

Why is diving so exciting?

Diving is not only the way to discovering the unknown, but it is also a lifestyle for people of different ages and cultures, more than just breathing underwater.

Diving in Primorye is an opportunity to relax and immerse yourself in a vibrant world full of secrets and adventures.

Peter the Great Bay is the largest and most picturesque bay of the Sea of ​​Japan, which attracts a large number of tourists every year. Those who want to join the sea beauties of the region often switch from a beach holiday to more emotional and diverse diving.

The shores of Peter the Great Bay, cut by numerous bays, stretching from the mouth of the Tumannaya River in the west to Cape Povorotny in the east. The movement of water in the area of ​​Peter the Great Bay is carried out under the influence of constant currents that form the main circulation of water. There is a cold Primorsky current descending from the north, and a sprig of the southern Tsushima current, which goes to the south of Primorye. Visibility under water in the area of ​​diving sites varies from 3-5 meters to 15-20 meters, depending on the time of year, weather conditions, the presence of plankton and wind directions. You can dive in Primorye both in the north and in the south. The question is in the level of expectation from diving and the level of tourist training.

For example, divers have a special love for high, rugged stone shores and separate rocks located nearby - kekurs, which break off into the sea with vertical walls up to 30 m deep. Such rocks are overgrown with yellow-green and dark-red carpet of sea anemones, and also become the habitat of colonies of purple ascidium. Many kilometers of the bottom of the coast are occupied by thickets of algae and herbs. Only multicellular algae in Peter the Great Bay - over 225 species.
By the number of species of animals and plants, the Sea of ​​Japan is the richest of the seas of Russia. Due to the wide temperature range, the conditions in the sea in the summer are quite suitable for the survival of the subtropical fauna, and in winter for the temperate and even arctic. Part of the animals adapted to such conditions, while the other part migrates. Primorye divers love to watch sea cucumbers, cucumaria, sea urchins, starfish, mussels and oysters. Also - among the inhabitants of the Sea of ​​Japan divers underwater can see octopuses and squids.

Among the permanent inhabitants of coastal waters there are also interesting species of fish. In coastal thickets, divers can find seahorses, various mollusks, and butterfly fish. Along the vertical dumps in small grottoes and crevices live gold and blue three-lane Japanese ruffs. “In the Primorsky Territory, a diver is confronted with such a diversity of marine flora and fauna that is not found in the southern seas. There are more than 200 commercial fish species here, and the famous giant Doflein octopuses, in addition to the Sea of ​​Japan, can only be found in Alaska. They are the main attraction of Peter the Great Bay - large individuals can reach three meters in length and weigh more than 50 kg. Such octopuses live in underwater grottoes, amid a heap of stones and rocks.