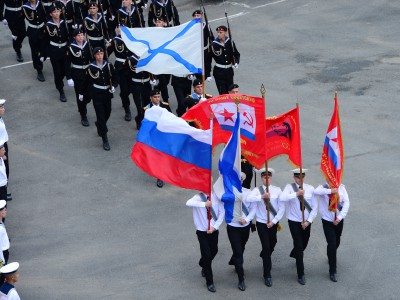 The most important holiday for Vladivostok. After all, the city emerged as the base of the navy and remains to this day.

The last Sunday in July is probably the most important holiday for Vladivostok. After all, the city emerged as the base of the navy and remains to this day.

On the Day of the Navy, the most cherished desire is to get an invitation to the stands of the Water Station of the Pacific Fleet. It is a precipitous shore of the bay, where two piers, a swimming pool for officers, and in general - this is the center of sports training for military sailors, here they swim and row.

A week before the holiday, the ships of the Pacific Fleet are lining up in the Amur Bay, and a real Vladivostok boy should, by silhouette, immediately distinguish a missile cruiser from a large antisubmarine ship.

Such a parade of ships can be seen only in several cities around the world. The spectacle is rare and unforgettable. Therefore, even the indigenous Vladivostok residents are already at the embankment from 9am. A lot of people in vests, veterans in front suits, children sit on their shoulders. The stands of the Water Station are filled with important guests.

At 11 o'clock the commander of the Pacific Fleet bypasses the formation of ships on his "admiral boat". Local television broadcasts live, so you can stay at home in front of the screen, everything will show "close-up." The commander greets the crews with three cheers. The Guard cruiser "Varyag" salutes from guns. After about an hour the admiral boat returns to the shore and the "view" begins. The ships come into motion and pass by the stands. Palba, the smoke. A red and white striped bathyscap flies up, then disappears again. A rocket boat simulates an attack. The infantry drops landing - and, miraculously, this is again Neptune with a suite of devils and half-naked beauties.

The Orchestra of the Pacific Fleet is the only military orchestra in the country with a violin group - it plays, marches and rebuilds. In general, you will not tell, especially since every year the program changes. To 2 pm the holiday at the Water Station ends and a huge crowd splashes out onto the streets of Vladivostok and spreads over the cafes, restaurants and other taverns of the main base of the Pacific Fleet.

Many go to the Korabelnaya embankment to pass by the headquarters of the Pacific Fleet and the submarine S-56. It is the same boat that crossed the Pacific Ocean in 1942, entered the Atlantic through the Panama Canal, reached the base of the Northern Fleet and destroyed four enemy warships and one transport. Here on the red stone are carved the names of Vladivostok residents who died in 1941-1945. And grandfathers tell their grandchildren about their family names.

Naval officers in white dress uniform with croquettes catch the admiring glances of the most beautiful Vladivostok ladies. Ladies and maidens twist in the square and at the entrance to the Officers' House, where there will certainly be a concert ....

In the evening, all the places from which they admire the soaring fireworks, are crowded with the public.