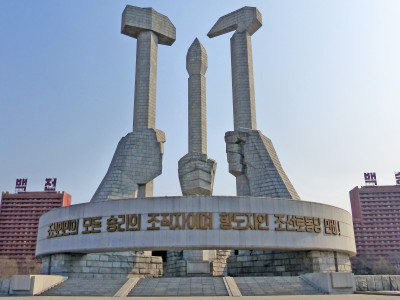 Every visit to North Korea focuses heavily and enthusiastically on the capital's monuments, towers, statues and buildings that glorify Kim Il-sung, Kim Jong-il and the Juche philosophy.

Arrival in Pyongyang at 13:00. Two guides of Travel Company will greet you at Pyongyang International Airport. On the way of 30 min drive to the city from the airport you’ll enjoy the beautiful landscape of the suburb of Pyongyang. You’ll have welcome lunch at the local restaurant in Pyongyang. After lunch you will have a city tour:

Grand Monument on Mansu Hill – bronze statues of President Kim Il Sung and General Kim Jong Il, the eternal leaders of the DPRK, group sculptures. You can buy flowers before going there and present flowers to the statues and make a bow before them following their local custom.

Chollima Statue – the symbol was introduced to North Korea by in 1956 by Kim Il-Sung, who used it as the mascot for his Chollima Workers Movement.

Arch of Triumph – built on the Triumph Return Square at the foot of Moran Hill the monument was built to honour and glorify President Kim Il Sung's role in the military resistance for Korean independence.

Tower of Juche Idea – This tower honours the North Korean philosophy of Juche and was unveiled to mark President Kim Il-sung's 70th birthday in 1982. Indeed, the tower is made up of 25,550 granite blocks – one for every day of Kim’s life until his 70th birthday. The tower stands at 170m and a trip to the top by lift (€5) is well worth it, providing a great view over the capital on a clear day.

Kaeson Youth Amusement Park (on your own),

Depart on the excursion:

Kim Il Sung Square – Pyongyang’s central square is where North Korea’s massive military parades normally take place. The plaza is ringed by austere-looking buildings: most impressive of these is the Grand People’s Study House, the country’s largest library. Other buildings on the square include the Korean National Art Gallery and the Korean Central History Museum. There’s a great view from the riverbank across the Taedong to the Tower of the Juche Idea.

Foreign Language Bookshop – the best-stocked bookshop in the city, this place is nearly always visited by groups, who can choose from a vast range of North Korean books translated into half a dozen languages, including the complete works of all three Kims in various volumes, leaflets and collections. There are also hand-painted propaganda posters, postcards, stamps and many other souvenirs on sale.

Liberation Tower – this stone column topped with a red star commemorates the Soviet liberation of Pyongyang from Japanese rule in 1945. Built in 1947, it is thoroughly Soviet in style, contrasting sharply with the very idiosyncratic later North Korean style of monument you'll see elsewhere in Pyongyang.

Mangyongdae Native Home – The suburb of Mangyongdae houses the place of Kim Il-sung’s birth, a typical Korean peasant house with a thatched roof and a block of living rooms, as well as a small barn, most of which looks as if it was built in the past few decades.

Lunch at the local restaurant.

Mansudae Art Studio – Art is another popular purchase in Pyongyang. Mansudae is a centralised art studio employing thousands of painters, embroiderers and sculptors. There’s a large selection of socialist-realist art available for sale, as well as more traditional landscape paintings.

Pyongyang Metro – Visiting the impressive Pyongyang metro is definitely a highlight of the capital. The network, which is made up of two lines, has a simultaneous function as a nuclear bunker in the event of a long-anticipated American invasion. Stations are deep below ground and you can even see blast doors that will close if Pyongyang ever comes under nuclear bombardment.

Victorious Fatherland Liberation War Museum – you will see the pictures and historical materials related to the Korean War of 1950-1953 and the weapons of the enemy which were captured during and after the war, tanks, armoured cars, US spy ship Pueblo,etc.

Drive to Kaesong (Once the capital of the Koryo dynasty, Kaesong has an interesting old quarter as well as the country’s most atmospheric hotel, but tours rarely spend much time here. Though just a few miles from the DMZ and the world’s most concentrated build-up of military forces, Kaesong (개성) is a fairly relaxed place just off the Reunification Hwy from Pyongyang. The city may boast an impressive 12 Unesco World Heritage sites, but is dominated by massive statues of Kim Il-sung and Kim Jong-il atop a large hill).

Panmunjom – you will witness the division of Korea, looking around the place where the Armistice Talks were held and the Armistice Agreement was signed and the conference halls for Military Armistice Commission and the Neutral Nations Supervisory Commission that straddle the Military Demarcation Line.

Koryo Museum – was a Confucian educational facility of Koryo dynasty and is now a museum where you can see historical remains and relics showing the foundation and development of Koryo dynasty.

Lunch at the local restaurant (served with traditional food Pansanggi).

Sonjuk Bridge – A tiny clapper bridge in Kaesong's old town, Sonjuk Bridge dates from 1290 and is famous as the assassination site of statesman Jeong Mong-ju in 1392, which heralded the end of the Koryo dynasty. A brown mark on one of the stones is said to be his bloodstain.

Pyochung pavilion – Built during the Joseon dynasty, this small wooden structure houses two enormous stone stele mounted on the backs of lion-turtles, one erected in 1740 by King Yeongjo and the other by King Gojong in 1872. Both commemorate Jeong Mongju's assassination, and praise his loyalty to the Goryeo dynasty.

Back to Pyongyang. Visiting Kwangbok supermarket on the way back.

Transfer to the Pyongyang airport.

Departure by plane to Vladivostok.

The price does not include:
- Visa 10 Euro
- Flight Vladivostok-Pyongyang-Vladivostok