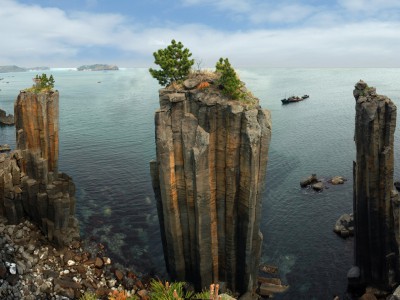 In this tour you will visit all main highlights of North Korea during 8 days.

Arrival from Vladivostok to Pyongyang at 13:00. Two guides of Travel Company will greet you at Pyongyang International Airport. On the way of 30 min drive to the city from the airport you’ll enjoy the beautiful landscape of the suburb of Pyongyang. You’ll have welcome lunch at the local restaurant in Pyongyang. After lunch you will have a city tour:

Grand Monument on Mansu Hill – bronze statues of President Kim Il Sung and General Kim Jong Il, the eternal leaders of the DPRK, group sculptures. You can buy flowers before going there and present flowers to the statues and make a bow before them following their local custom.

Fatherland Liberation War Museum - perhaps the most interesting museum in Pyongyang, this mouthful of an institution opened its current home in 2013 to mark the 60th anniversary of the end of the Korean War. Outside you'll see war-damaged tanks, weapons and aircraft used by both sides in the conflict, while inside there are dozens of exhibits and a 360-degree diorama of the Battle of Daejon. In the foyer look out for the statue of a young Kim Il-sung, where he looks exactly like his grandson.

Embroidery Institute Pyongyang - A large-sized embroidery work created on the basis of the "Picture of Peasants' Life" by Kim Hong Do, a renowned artist in the 18th century, has been highly appreciated for a vivid depiction of it by the application of various embroidery techniques, which gives an effect of solidity. Many embroidery works of figures, landscape, animals and others produced by the institute are popular among Korean and foreign visitors.

Jangchon Vegetable Cooperative Farm in Sadong District of Pyongyang City is associated with the fatherly love of President Kim Il Sung. Here you will astonishment at how North Koreans live their lives and how emotional they get when they talk about the only three DPRK leaders they’ve known their entire lives.

Lunch at the Hotel.

Tower of Juche Idea – This tower honours the North Korean philosophy of Juche and was unveiled to mark President Kim Il-sung's 70th birthday in 1982. Indeed, the tower is made up of 25,550 granite blocks – one for every day of Kim’s life until his 70th birthday. The tower stands at 170m and a trip to the top by lift is well worth it, providing a great view over the capital on a clear day.

Monument to the Foundation of the Workers' Party – This startlingly bombastic monument has starred on the cover of more books about North Korea than almost any other. The three hands portrayed represent the worker (holding a hammer), the peasant (holding a scythe) and the intellectual (holding a writing brush). It's an enjoyable visit, not least because you're in the middle of the city and curious locals often pass by.

Visiting Kim Il Sung Square - Pyongyang’s central square is where North Korea’s massive military parades normally take place. The plaza is ringed by austere-looking buildings: most impressive of these is the Grand People’s Study House, the country’s largest library. Other buildings on the square include the Korean National Art Gallery and the Korean Central History Museum. There’s a great view from the riverbank across the Taedong to the Tower of the Juche Idea.

Foreign Language Bookstore - The best-stocked bookshop in the city, this place is nearly always visited by groups, who can choose from a vast range of North Korean books translated into half a dozen languages, including the complete works of all three Kims in various volumes, leaflets and collections. There are also hand-painted propaganda posters, postcards, stamps and many other souvenirs on sale.

Departing to Kaesong - enjoy a 2.5 hour drive south along the 'Reunification Highway' to the historic city of Kaesong then will head for the DMZ where we’ll hear from our guides a perspective of the Korean War that often gets discredited or unheard. Afterwards, we will head to the Koryo History Museum or Kaesong Koryo Museum, a UNESCO World Heritage site, to learn about the Koryo Dynasty (where the name Korea originates). Then, stop at the original Sonjuk Bridge, a UNESCO site. Next stop will be Stamp Exhibition House and Tomb of King Wanggon (King Wanggon was the founder of the Koryo Dynasty and died in 943. The original tomb was badly damaged by the end of the Japanese occupation, and most of the site today is apparently recently reconstructed).

Way back to Pyongyang.

Transfer to Wonsan - This port city on the East Sea is not a big tourist draw, but makes for an interesting stop en route to Kumgangsan from Pyongyang. Wonsan is an important port, a centre of learning with 10 universities and a popular holiday resort for North Koreans, with lovely sandy beaches at nearby Lake Sijung and Lake Tongjong. There's also a recently built ski resort nearby, which opened in 2016 and is a source of great national pride.

Visiting the Ullim Falls. It is one of the famous waterfalls in Korea. The falls is originated from ranges of Masik Pass, with 20 to 25 cubic meters of water volume per second the 75m cataract pours down. The falls hit a rock in the halfway and divides into twin falls at the height of 45 meters, making thunderous sound echo as far as four kilometers around. That is why the waterfall is called "Ullim" or "echo" in Korean. At the bottom of the falls, there is a pond, 1.5 meters deep and 30 meters in radius, inhabited with minnow, rainbow trout and other species of fishes.

Lunch at the restaurant.

Sondowon International Children’s Union Camp - Situated right on the coast, this area of pleasure grounds stretching to around 500 hectares is dotted with verdant pine trees and clear waters, and it is possible to bathe in the sea here on the white, sandy beach. There is also a botanical and zoological garden providing an attractive backdrop. Songdowon is also known for the International Children's Union Camp, a large extracurricular centre for local and foreign children.

Chonsam Cooperative Farm - Situated on the outskirts of Wonsan, the Chonsam Cooperative Farm is one of the few places where foreign visitors are allowed to observe a working farm. Chonsam means "an area of three villages where springs well out". The farm is specialising in cultivating rice, maize and vegetables. Persimmon is the speialty of the farm - you will hear the great story about Kim Il Song who visited this farm and spotted how many persimmons were hanging at a tree. In the farm there is a kindergarten which tourist usually visit to enjoy children's performance. You also can visit a farmer's house to chat with the family and see how people live in the village.

Trip to Mt. Kumgang. This picturesque, bucolic area is divided into the Inner, Outer and Sea Kumgang regions and is often visited on tours. The area is classical East Asian landscape dotted with Buddhist temples and hermitages, waterfalls and mineral springs, all set against a background of gentle mountain peaks. In any other country on earth this would be prime hiking and climbing territory, but sadly here most visitors will be limited to brief strolls at each site.

Dinner and overnight at Kumgangsan Hotel 4*.

Hiking to Kuryong Falls - The roaring water falls down from 74 m height. The Kuryong Falls are 4 m wide and 74 meters high. In front of the Falls ther is the Kuryong Pavilion, from where the beautiful falls can be conviently observed. Just under the falls there is the 13 m deep Kuryong Lake. Just across Ryondam Bridge there is about 700m steep path to Kuryong Rock from which you can enjoy view on a deep valley and eight big lakes called the Upper Pal Lakes.

Lunch at the restaurant.

Onjung-ri - It is about 10 m walk from Kumgansan hotel. There are traditional Korean houses with small vegetable gardens there. Behind the village there is Egg-shaped Rock on top of a few smaller rocks. There is a legend saying that one of the rocks once was a general who decided to kill with his sword snake which wanted to eat an egg but gods converted both to rocks. Thus in front of the rock still there is a stone shaped as a cut snake.

Hot Spring in Mt. Kumgang (on your own) - near Onjung-ri, about 300 m from the Kumgangsan Hotel there is Kumgangsan Hot Springs where you can enjoy radon spa rich in radium, minerals and silica with temperature of 37 to 44C.

Dinner and overnight at Kumgangsan Hotel 4*.

After lunch on the way back to Pyongyang we will visit The Tomb of King Tongmyong. One of the tombs is the royal tomb of Tongmyŏng (58–19 BC), the founder of the ancient Goguryeo kingdom, northernmost of the Three Kingdoms of Korea. In total, there are 63 individual tombs of the period.

Kumsusan Memorial Palace of the Sun – Kim Il-sung’s residence during his lifetime, the Kumsusan Palace remained so after his death. North Koreans come here en masse to pay their respects to Kim Il-sung and Kim Jong-il, both of whom now lie embalmed in glass boxes. The palace is eerie, with bricked-in windows and a vast and empty plaza before it, and the entire experience is easily one of the weirdest you'll have in North Korea (which is quite an accolade).

Revolutionary Martyrs’ Cemetry on Mt. Daesong – is a cemetery and memorial to the North Korean soldiers fighting for freedom and independence against Japanese rule. The cemetery with hundreds of tombs was completed in 1975 and in October 1985 was renovated and expanded. It covers an area of 30 hectares. The entrance to the cemetery is marked by a monumental gate in Korean style. Each of the graves is provided with a bronze bust. At the far end of the memorial there is a conspicuous red flag made of granite and the graves of famous people.

Lunch at the local restaurant.

Mangyongdae Native Home - located a kilometre from the centre of Pyongyang, Mangyongdae is the place of Kim Il Sung’s birth. President Kim Il Sung was born here on April 15 1912 referred to in the DPRK as Juche 1. His birthday is one of the main holidays in the DPRK. The Eternal President of North Korea was the eldest son of his family. He left Korea at a young age and then returned after the liberation of the country in 1945.

Pyongyang Circus (on your own) – The DPRK got their very own circus in 1952, under the direction of Kim Il Sung. Circus acts are considered a refined art in the DPRK, because of this 54,000 square feet was allotted for the performers.

Transfer to the Pyongyang airport.

Departure by plane to Vladivostok.

The price does not include:

If you want to book this tour, please be free to contact us.