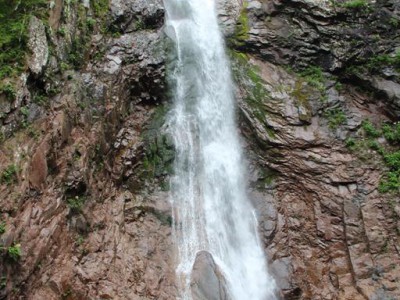 There are about 25 waterfalls in Primorye. The highest of them is the Amginsky waterfall or as it is called the Black Shaman. It is located in Terneisky district, its height is 37 m. And it is not completely visible due to the canyon bends. No less romantic and eerie name is the canyon, in which the waters of the Amgu River - the mouth of the Devil - flow. It's amazingly beautiful wild places, hiking trails to where, laid quite recently.

We invite you to an air tour to Terneisky district!

- Excursion to the Cape North or Lake Blagodatno - the territory of the Sikhote-Alin Reserve. (3-4 hours)

The Amginsky waterfall is a natural monument located in a narrow (sometimes up to 2 m wide) and winding canyon with known rocky sides (up to 100 m high). The height of the highest of the Great Amga waterfall is 37 m. The canyon extends for 1.5 km, with a gradual decrease in the height of the rocky sides from 150 m to 8-10 m to the upper reaches. On the right bank of Amga river there is the Amginsky waterfall, which was first described by VK Arseniev in October 1906. The waterfall is located in a narrow stone corridor, the upper edges of which are slightly curved inwards, the water is like a pipe. At the base of the waterfall, the water swirls, creating a large foam boiler. The rocks here have a brownish-red coloration and in some places are covered with bright green moss. This gives the waterfall a special beauty.